Is There a New Scheme to Scam Celebrities? A Look at Scott Levy’s “Charity” Offer

It’s tough being a celebrity.

Scam artists and frauds are always looking to steal from celebrities in any way they can.

Promising “charity” in return for retweets.

Scott Levy, an SEO marketing ‘guru’ in the news recently for stealing content, has cooked up a scheme aimed at leveraging celebrities for popularity. Levy promotes an SEO company called “Fuel Online.”

Levy has asked for retweets from pop stars like Rihanna, Katy Perry, Justin Bieber, Taylor Swift, Lady Gaga, and Justin Timberlake in return for $1000 to be donated to charity. 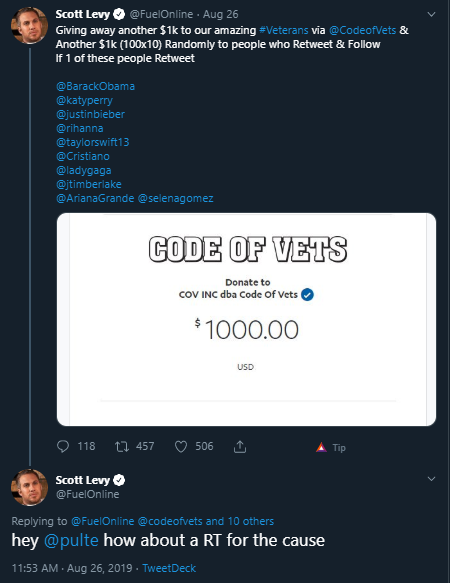 The problem is, according to ScottLevyExposed.com, that Scott Levy has a reputation as a scammer that does not pay his promised giveaways to charity.

(Levy reportedly did not pay $100 to ten people as promised in a giveaway to the trending hashtag #TwitterPhilanthropy).

Levy is stirring up attention around these celebrities, using their names to drive his retweets, when there is no guarantee he would actually give the money away.

The scam against the celebrities is a lose-lose for them, and a win-win for reported scammers like Scott Levy.

If the celebrities ignore the potentially fake offer of $1000 to charity, celebrities like Rihanna and Lady Gaga may look callous online for ignoring such offers of charity.

But if the celebrities do accept the offer, then the scammer may earn attention worth millions of dollars from a Katy Perry or Taylor Swift retweet.

If the scammer actually pays, then a brand might be built with associations to the celebrity who kicked off the “charity” that was given.

If the scammer doesn’t pay, or even if he does, the artist has given away free attention to a scammer that may take advantage in the worst way of the celebrity’s audience.

A total lose-lose, which is what reported scammers like Scott Levy are counting on.

Celebrities are constantly being put in precarious positions by fakes around them in real life, but new scams like this threaten celebrity reputations with a potentially fake offer for charity.

Always beware the scammer, especially when you’re rich and famous.

4 puts on for his city with new single “Bang”